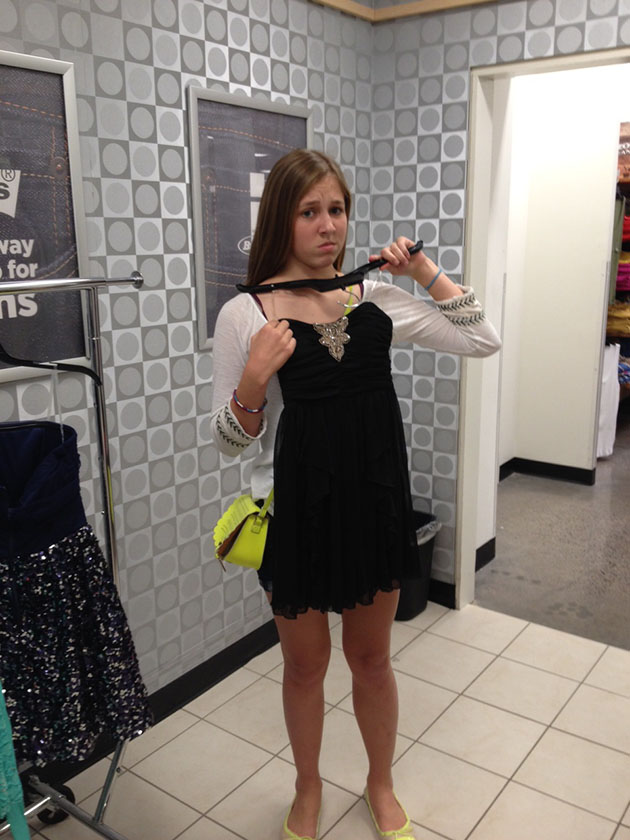 An opinion by Samantha Russell and Anna Rossini:

Is it really that hard to find a dress for homecoming? What about finding a dress that is PA appropriate? Do  people enjoy the restrictions on the music for the dance?

To the disappointment of most girls who attend the dance, yes, it is difficult to find a dress that is compatible with PA’s standards.

Kayla Bartsch states, “I think it’s good that Providence tries to keep everyone modest, but as a girl, it’s extremely challenging to find dresses that fit the code.”

Dresses are commonly a frustration for girls at a school dance.

“They want our dresses to be modest and that’s why they made the knee length rule. But there’s a problem: it is almost impossible to a find a dress that actually goes to your knees.” states Mary Walz ‘16.

According to Frances Christianson ‘14, “It’s impossible for girls with long legs” but for others, it is possible, but harder. The right clothing store has to be found.

Shopping in stores such as Macy’s or JCPenney’s proves impossible to find a modest dress. According to Lizzie Reuschenburg ’16, Anna Ratstetter ’16, and Megan Emer White ’16 who went dress shopping a week ago and could not find anything to wear. Megan went up to the counter and asked, “Do you have any modest dresses?” The reactions of the people working were priceless. After an awkward silence of a minute, they told them where the dresses were inside the store. The dresses were either too short or strapless.

“The most modest dresses we found were in a kids’ section,” says Ratstetter.

What are people’s solutions? Staying at home wrapped up in cozy blankets in front of the television as Brenna Smith ‘14 admits, “I have never really gone except for last year because I could not find a dress.”

Another answer would be to add a few inches of matching fabric onto the dress itself. Samantha Kelly ‘16 thinks “they should shorten the limit by like two inches.”

Music has also been a frequent concern among the students who are disagreeing with the rules.

William Johnson ‘16 says, “It is over restricted and I don’t see the point.”

“They should let us have music, but in the clean versions”  explains Mary Walz.

Liza Kourdaev ‘16 states, “I understand that explicitness is not allowed but they (PA staff) take it too far out of control.”

Another sophomore, Sam Kelly, says, “ What we consider good music isn’t approved so the dance is not as fun.”

There are also those who are not affected. Not everyone listens to mainstream music.

After talking to many PA students about this matter, we suggest that the policies should be reviewed.

One Reply to “Opinion: The headaches of Homecoming dance restrictions”