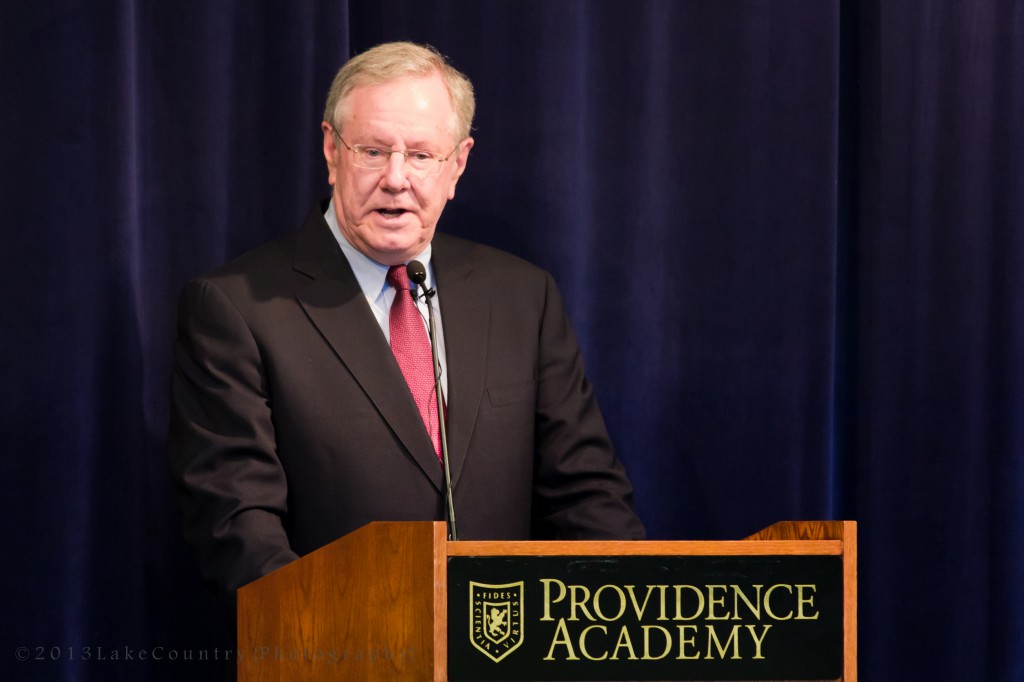 “I hope you’re missing a class you wanted to miss.”

This was the opening statement of Steve Forbes’s May 1 speech at Providence Academy.

PA students, teachers and parents queued to meet the editor-in-chief of Forbes magazine (and two-time Presidential candidate) after he spoke that morning on matters economic, social and entrepreneurial, with what the audience regarded as candidness.

“I thought he did a great job connecting with the students,” said Mr. Michael Maglich, Member of the Board of Directors. “I thought it was great how he mentioned he wasn’t a good student.”

Forbes reinforced that no one has a perfect life.

Alex Dobos ’14 said that she felt comforted by Forbes’ reassurance that no one is “master or mistress of the universe.”

“It makes you feel good if you’re not a genius,” she said.

Among various other topics, Forbes gave opinions and anecdotes about his famous family, entrepreneurship, and the benefits of a free market–including morality.

“Free markets are based on a moral foundation,” said Forbes during his speech, “because you succeed only by meeting the needs of other people…it’s not greed, it’s exchange.”

After a majority of students had wandered back to class, Forbes gave the PAW an interview, commenting on several issues relevant to students at PA and beyond.

One such topic was college.

With the “bloat in tuition,” Forbes predicted a fundamental change in the American college education.

“I think you’re gonna see a radical change in how all of that is done in the next generation,” he said.

He mentioned a rise in online degree programs, even at places like MIT, and suggested cutting the time for a Bachelor’s degree: “Why not do it in 3 years?”

Regarding the generation itself now coming of age, Forbes is decidedly optimistic.

“I look to you guys for a slew of new inventions and innovations.”

Additionally, Forbes speculated about a generational “change in what you might call social philosophy”, that the “nonsense we’ve gone through in recent years” will inspire a return to Constitutional principles.

One thing that will never revert to its origins in print, he says, is his own field: journalism.

“What you might call a model for the media world is…shattered,” he said.

Forbes publishes about the number of articles online every day that it once did per biweekly magazine.

Because of the protean nature of modern journalism, Forbes said that income for news sources like Forbes has decreased, at least in traditionally lucrative areas.

“Advertising revenue is very hard to come by,” said Forbes.

In another vein, Forbes said that private education like PA has capacities public school doesn’t.

“I think there’s a much sharper focus on purpose,” he said. “In terms of inculcating values, public schools are very restrictive in what they can do.”

Uniforms, according to Forbes, allow students to focus on learning.

Forbes commented on what he called “fiefdoms” during his speech, a reference to isolated feudalism. He said that uncommunicative, entirely separate departments have emerged in places like the Department of Agriculture and Sony, which negatively affect the organizations.

“You see it in academia all the time: ‘English will not mix with science,'” he explained.

With regard to schools, he said, this might be fixed in two ways: leadership within, and “course offerings that will go across barriers.”

Just because of academic divisions, he said, “it doesn’t mean it’s a self-contained world.”